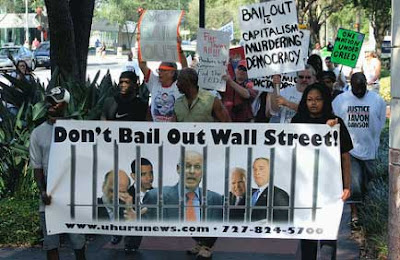 “Don’t bail out Wall Street,” echoed through the streets of St. Petersburg, FL on Saturday Oct. 4 as the Uhuru Movement led a protest against the plunder of U.S. taxpayers’ money for the benefit of bankers and the ruling elite.

The march included representatives of a diverse group of organizations including the Green Party, The Refuge Ministries, Poor People’s Economic Justice Campaign, Ron Paul’s Campaign for Liberty, St. Pete for Peace, Progressive Democrats of America and others.

It was the day after the bailout was passed by Congress and the demo showed that we have no respect for a bill that was passed in spite of overwhelming popular opposition.

The bailout guarantees that the bankers and wealthy investors will secure their posh mansions and lifestyles. Meanwhile African and Mexican communities that were targeted for predatory subprime mortgages are losing their homes at record rates and are being criminalized by the media for striving for the very elusive “American dream” of homeownership.


African and Mexican subprime mortgage borrowers were lied to and scammed by a comprehensive plan that included everyone from the Department of the Treasury, the Federal Reserve bank and the Office of Housing and Urban Development to Fannie Mae, Wall Street investment firms, the low-life “creative” mortgage lenders, neocolonial Uncle Tom politicians and Barack Obama’s campaign finance chair Penny Pritzker, credited with being one of the creators of the subprime phenomenon. Everyone on this side of the equation made a bundle money at the expense of the African and Mexican communities, and they are getting bailed out!

African families making more than $100,000 a year were given subprime mortgages far more often than white people making less than $40,000 a year, so, yes, it was a “race” issue.

The reality is that borrowers who are defaulting on mortgages have nothing to do with the creation of this crisis. The current economic crisis was brought about by Wall Street bankers, brokers, hedge fund managers and investors who bundled up all those loans, cut them up into slices and invested them as highly leveraged mortgage backed securities (MBS) around the world. They made into the trillions of dollars doing that.

Had Wall Street not done that we might be seeing a lot of people in foreclosure at the moment, but the parasitic Wall Street financial system would not be crashing down in the way it is now.

What we are seeing, as Chairman Omali Yeshitela always points out, is the crisis of imperialism which is now manifesting on the economic front. From the defeat of the U.S. by the Vietnamese people in the 70s to the victory of the people Cuba and Nicaragua, to the powerful Black Revolution of the 1960s, imperialism has been in a political crisis for a long time.

Now the system built on the enslavement of a whole continent of people, turning them into the world’s most lucrative commodity; built on the genocide of the people of the Americas and the theft of their land and resources; built on colonial domination of the majority of humanity, is crashing down from an implosion of its own blood-sucking weight.

After 500 years of white power African and Indigenous peoples around the globe are rising up to take back what is theirs. This is the only solution for a decent future for all people. As Chairman Omali would say, good riddance to this parasite as it gets flushed down the toilet of history.

Posted by Uhuru Solidarity Movement at 9:08 AM

The Obama campaign's national finance chair, former Superior Bank/Coast-to-Coast Financial Corporation/Alliance Funding board member Penny Pritzker, also was apparently one of the originators of the "securitization of toxic mortgages process" which helped cause the collapse of the U.S. banking system. See the November 2002 article from In These Times that was reposted on the following blog link:
http://www.bfeldman68.blogspot.com/

Can Obama bring the change we need?
Slideshow

We welcome all comments from any point of view as long as they are thoughtful, respectful and reasonable. We do not allow any comments that are white nationalist, anti-black or targeting any specific group. Such comments will be removed from this blog.